The history of the web offset printing press

Would you have known? – Offset printing, as we know it today, goes back to a walk on a rainy day in 1796. At that time, the German Alois Senefelder noticed a stone on the roadside on which a sheet of paper had appeared, and he had the idea of a completely new, particularly sharp printing process: lithography (Greek lithos = stone, graphein = drawing, writing).

Alois Senefelder made use of the physico-chemical principle of the mutual repulsion of fat and water: a musician by birth, he wrote notes on a flat stone plate with greasy ink, which became water-repellent at these points. He treated the "printing plate" illustrated in this way with a diluted acid, which made the unlabeled areas water-absorbent.

The actual printing process then consisted of three steps:

Timeline – the most important milestones of web offset printing in Augsburg

1872 – A complete printing set-up with pressure vessel and steam engine is delivered.

1873 – The first rotary press for newspaper printing in Germany is built in Augsburg.

1879 – The first commercial web press in Europe is built in Augsburg. 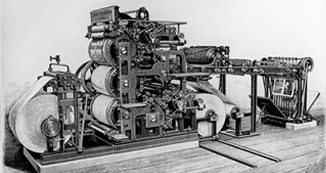 1921 – First web offset printing press at the plant in Augsburg

1925 – The largest German rotary press with 15 printing units is designed and built. 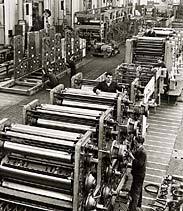 1960 – 75 % of the total circulation of all daily newspapers in Germany is produced on presses from Augsburg.

1962 – "The next generation": A new generation of web offset presses is developed – the LITHOMAN series.

1977 – Market launch of the UNIMAN – the first two-plate wide rotary offset press for newspaper printing on the market.

1988 – The largest order in the history of the printing industry, worth over DM 1 billion, is received from News International in February 1988.

1996 – The 250 meter long GEOMAN is installed in Brazil – the longest newspaper printing press in the world.

2001 – The COLORMAN XXL, which can process paper webs of up to 2100 millimeters, is introduced.

2004 – The DICOweb, the world's only offset press with integrated imaging and deletion of the printing plate on printing plate sleeves, starts production.

2007 – Starting the first B2B online shop in the printing industry

2012 – The first COLORMAN e:line is put into operation at Allgäuer Zeitungsverlag in Kempten. With 100,000 copies per hour, it is the fastest newspaper press in its class. // Presentation at DRUPA: new One Touch operating concept (mobile use of touch pads)